When a transparent specimen is immersed in a fluid of the same refractive index, it effectively becomes invisible. For most purposes, transmitted-light bright field microscopy uses the full 'solid' axial cone of illumination supplied by the condenser. This is suitable for amplitude specimens (those which are stained or naturally-coloured), but not for transparent unstained phase specimens. The eye perceives only differences in wavelength (as colour) and amplitude (as brightness) of the light reaching it. The eye cannot see differences in the phase relationship between different beams of light, nor can it discriminate the electric vector component of the light wave, nor the plane of polarization. Very few microscopical specimens inherently possess sufficient natural highly-saturated colour to allow them to be studied without extra treatment, hence biological specimens have usually been viewed as stained preparations of dead material — by bright-field transmitted-light microscopy. Stains alter the color and brightness of the light passing through the specimen, and increase contrast in the image. 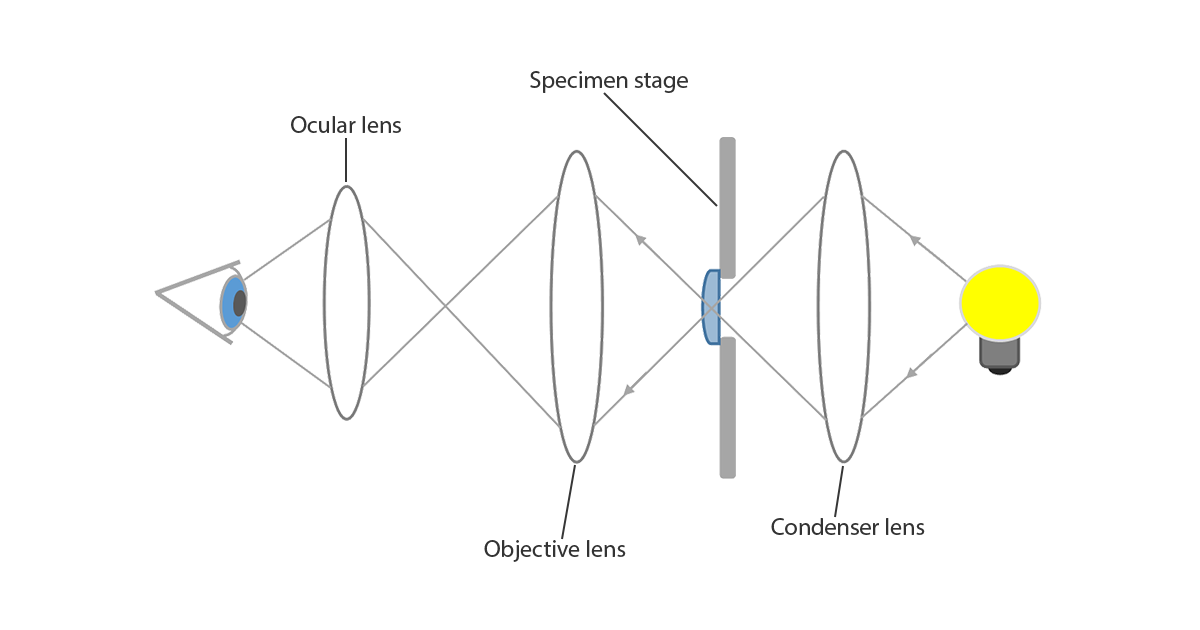 Construction of the Bright-Field Microscope

The figure above is a schematic representation of an upright microscope. Note that the specimen is usually squeezed between a slide and a coverslip, in order to avoid contact with the objective.

Nowadays, cellular function is better understood by studying the actual motion, growth, reproduction and the exchange of cell constituents of living cells than it is by drawing conclusions from artificially manipulated dead ones. Since cells are generally transparent structures, they are almost invisible to the eye by bright-field microscopy. Because of their structure, most specimens produce phase changes, rather than amplitude changes, in the light passing through them. We manipulate the contrast in the microscopical image in order to optimise visibility. This method enables us to see very transparent objects, which are otherwise almost invisible by ordinary light microscopy, in clear detail and in good contrast to their surroundings. This is achieved optically, without altering the specimen by staining or other processing. Here, a contrast-enhancing optical technique is employed to produce high-contrast images of transparent specimens. This optical mechanism, translates minute variations in phase, into corresponding changes in amplitude — which is visualized as differences in image intensity. 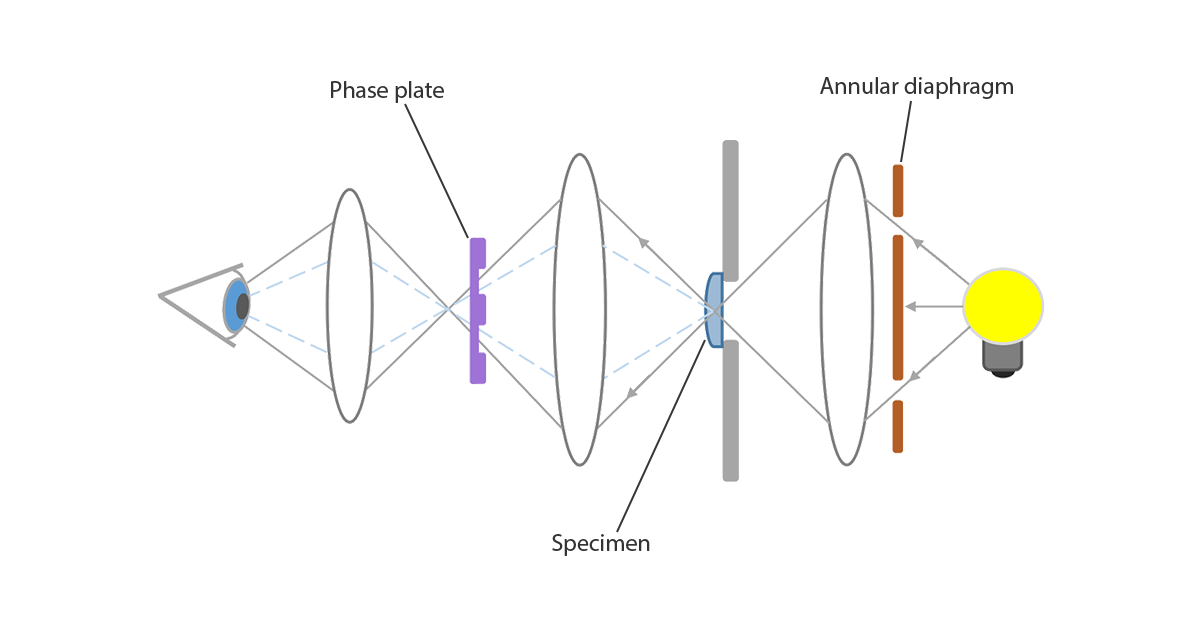 In order to convert the image of an invisible specimen into an image that the eye can detect, we exploit the interaction of the illuminating beam of light with the specimen.

Diffracted beams carry information about the structure of the object. An image of the object is formed at the primary image plane owing to interference between those beams diffracted by the specimen and the undiffracted beam. Interference of the two sets of beams leads to overall differences in amplitude, which can be detected by the eye as differences in brightness. Transparent cells introduce a phase difference between the two beams of only one-quarter wavelength (¼ λ). We render these specimens visible, by an artificial means that introduces an extra ¼ λ phase difference between the diffracted and undiffracted beams. Here, ¼ λ phase difference is contributed by the specimen and a further ¼ λ phase difference by the microscope. A special set of objectives, fitted with phase plates, is normally needed in order to achieve this effect. Optical device manufacturers generally provide several different sizes of annuli in the condenser to match objectives of differing magnification and numerical aperture — brought onto the optical axis of the microscope as required. Provision is usually made for centring each annulus with respect to the optical axis of the condenser. The phase plate carries an absorbing layer that reduces the amplitude of the undiffracted beam, reducing its brightness to match that of the weaker beams that are diffracted by the specimen.

The concept key to the design of a phase contrast microscope is the segregation of the undiffracted and diffracted wavefronts emerging from the specimen, which are projected onto different locations in the objective rear focal plane. Moreover, the amplitude of the undiffracted wave is reduced and the phase advanced or retarded by a quarter wavelength (¼ λ) — in order to maximize the intensity differences between the specimen and the background in the image plane. Many people new to microscopy use the condenser iris diaphragm to introduce contrast into the microscopical image mistakenly believing that doing so produces a better image. However, the degree of supposed improvement is not as great as imagined. Contrast is not inherently dependent upon the structure and size of the specimen, but it does depend upon how the specimen interacts with the illumination and how the light leaving the specimen is further modulated and received by the eye. In any compound microscope, proper control of three fundamental parameters governs its use. They are: resolving power, contrast, and magnification — in that order of importance. To the lay person, microscopes are just about magnification, but this is required merely to present the resolved detail to the eye. 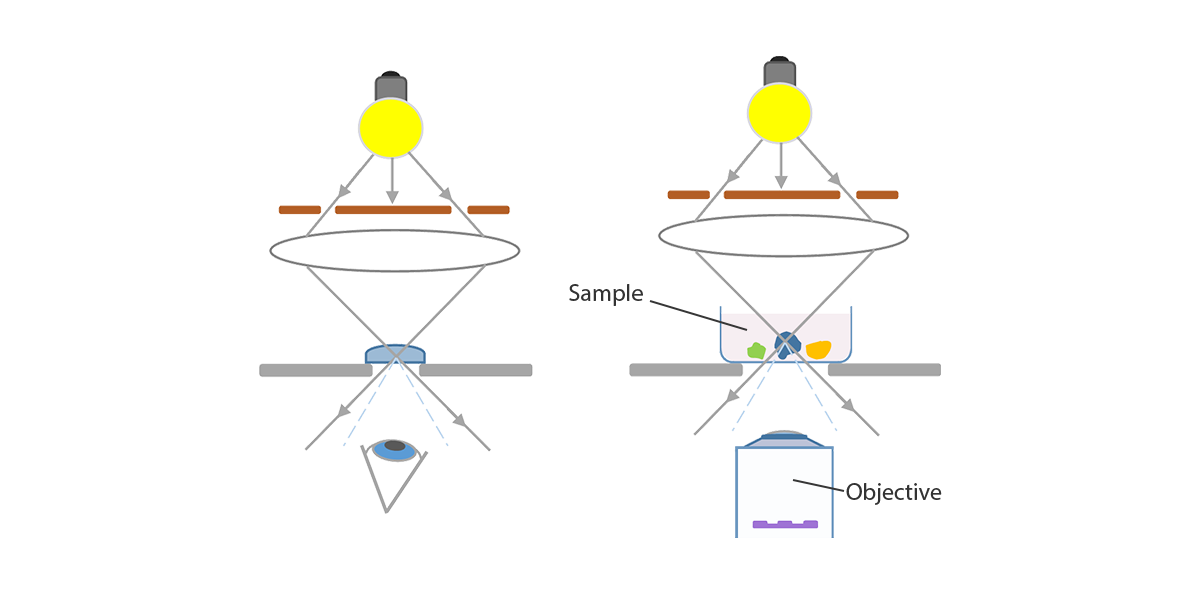 Schematic of Our Inverted Microscope

The concept key to this design is the segregation of undiffracted and diffracted wavefronts emerging from each specimen (cell) in the sample. A contrast-enhancing optical technique is employed to produce a high-contrast image of each cell. A special set of objectives, fitted with phase plates, is needed in order to achieve this effect. Note the thin vessel bottom, through which the three cells are observed.

Inverted Microscopy at a Glance

The light source of the Science IVM 401 points down onto the condenser placed above the stage, while the sample is viewed from below. This configuration is particularly useful as living cells can be imaged at the bottom of the vessel instead of being fixed to a slide and viewed from above. This technique has several advantages over upright microscopy. Sterile working conditions are guaranteed as there is no contact between the objective and the sample. Here, the use of objectives with high numerical aperture is also possible since the bottom of the sample-containing vessel is optimized for imaging. With a stained specimen there is a half-wavelength (½ λ) phase difference between the undiffracted beam and those diffracted by the specimen. Interference of the two sets of beams leads to overall differences in amplitude, which can be detected by the eye as differences in brightness. Thin transparent objects, such as cells, introduce a phase difference between the two beams of only one-quarter wavelength (¼ λ). What is required to render these specimens visible, is an artificial means of introducing an extra ¼ λ phase difference between the diffracted and the undiffracted beams, so that the eye sees the overall amplitude difference (due to interference) once the beams are recombined to form an image.