Blood is the most common biologic fluid that is collected for testing in a clinical laboratory. It is usually drawn from a vein directly into an evacuated tube. Typically, a tube will hold about 5 mL of blood — enough to perform many clinical chemistry tests since semi-automated analyzers require only small amounts (typically from 2 to ~100 µL) for a single test. Blood consists of two main parts — a liquid portion (called plasma, which contains the dissolved ions and molecules) and a cellular portion (the red blood cells, white blood cells and platelets). Most clinical chemistry analytes are found in the plasma. The preparation of blood for testing these analytes involves separating the cellular portion from the plasma. This is done by centrifugation of the sample to pack the blood cells in the bottom of the collection tube and allow removal of the liquid portion for testing. If blood is collected in a tube containing an additive (called an anticoagulant) that prevents the blood from clotting, the liquid portion of the blood is called plasma. Blood should ALWAYS be collected after a fasting period. Where this is not the case, increased levels of some metabolites can be observed due to ingested nutrient metabolism. 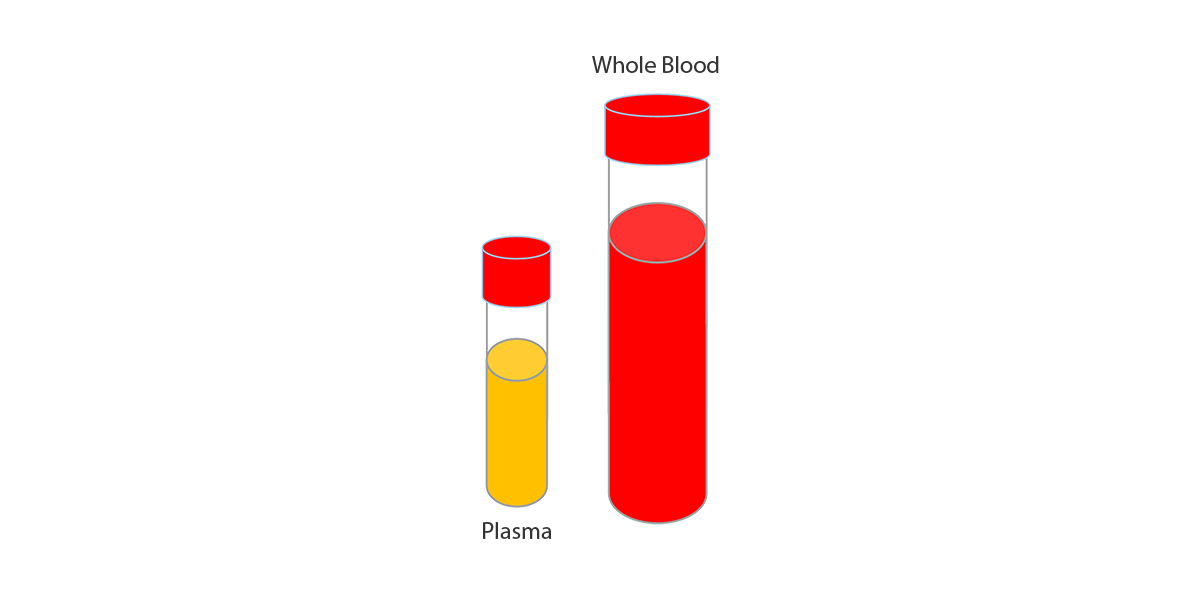 Options include a closed or an open sample collection system. Following venipuncture, freely flowing blood is taken directly into the test tube.

In general, blood samples should always be collected in the standard sitting position, which is not always possible in hospitalized patients. It must be kept in mind that the difference in protein concentration when comparing a standing vs. sitting position for 15 minutes is 5 ~ 8 %, and about 10 ~ 20 % for a standing vs. recumbent position. In the standing position, water transfers from the intravasal to the interstitial space, which subsequently leads to a rise in high-molecular weight substances — primarily proteins, lipoproteins and protein-bound substances — such as calcium cations and hormones (cortisol, thyroxin), or some drugs.

Blood collection takes place in the morning, when we can be sure that the patient has fasted (provided the patient respects general pre-collection recommendations) and the circadian rhythm effect is limited. Some samples might be taken, based on a drug's elimination half-life — when monitoring blood sugar (blood sugar profile) or pharmacotherapy. If sample collection follows an infusion, we ideally collect blood from the other arm, i.e., where the infusion was not applied, or stop the infusion for 15 minutes and then take the sample. A suitable needle lumen is selected for blood collection in order to avoid red blood cell haemolysis.

If blood is collected in a tube with no anticoagulant, the blood will form a clot. A clot is a gelatinous semisolid composed of cross-linked protein that is formed in a multi-step process referred to as the clotting cascade. Calcium ions and platelet phospholipids have to be present for proper activation. The aim of activation is to produce a sufficient amount of factor II (thrombin). Thrombin releases fibrin monomers from fibrinogen, and fibrin monomers crosslink to form polymers. Factor XIII reinforces the fibrin network (scaffold) to form final fibrin coagulum. Here, fibrinogen is the coagulation factor that is changed into fibrin by the action of thrombin, which is a key step in blood clotting. Upon centrifugation the clot descends to the bottom of the tube along with the cells. The resultant liquid above the cells and clot is called serum. Serum contains all the components of plasma except the clotting proteins, which are consumed in the cascade of reactions that form the blood clot. Tubes which are used to collect blood have color-coded caps that signal if any additives are present in the tube. Some collection tubes contain an inert silica gel plug that positions itself between the cells and the serum or plasma during the centrifugation step. 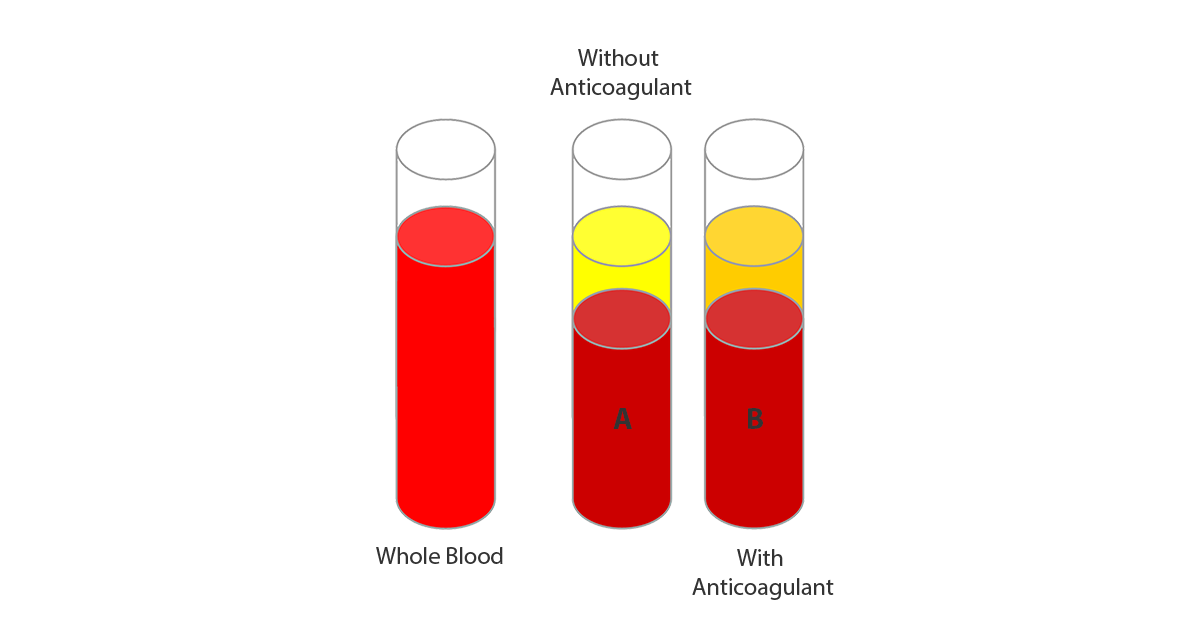 Additives may be anticoagulants to allow preparation of plasma or may be substances included to protect analytes from chemical or metabolic breakdown.

The Effect of Anticoagulants

As mentioned above, anticoagulant (heparinate, citrate, oxalate, etc.) can be chosen depending on the required test. Nevertheless, attention needs to be paid when choosing the anticoagulant. Good doctors use both individual clinical expertise and the best available external evidence, and neither alone is enough. Certain types of anticoagulants may be incompatible with some kinds of tests. For example, EDTA is an anticoagulant that inhibits the clotting of blood by sequestering calcium ions that are necessary components of clotting reactions. Samples of plasma collected using EDTA tubes are generally unsuitable for measurement of calcium and for any test method that involves a reaction step that would depend on the availability of calcium. The use of EDTA tubes with potassium will lead to highly pathological potassium concentrations in the sample. The addition of sodium fluoride will cause glycolysis inhibition in red blood cells, thus preventing a drop in glucose concentration over time. We must keep in mind that, when a collection set containing an anticoagulant is used, without mixing, the anticoagulant effect is limited and undesired blood clotting will occur. Clotting proteins will be consumed in the cascade of reactions that form the fibrin network in the blood clot. 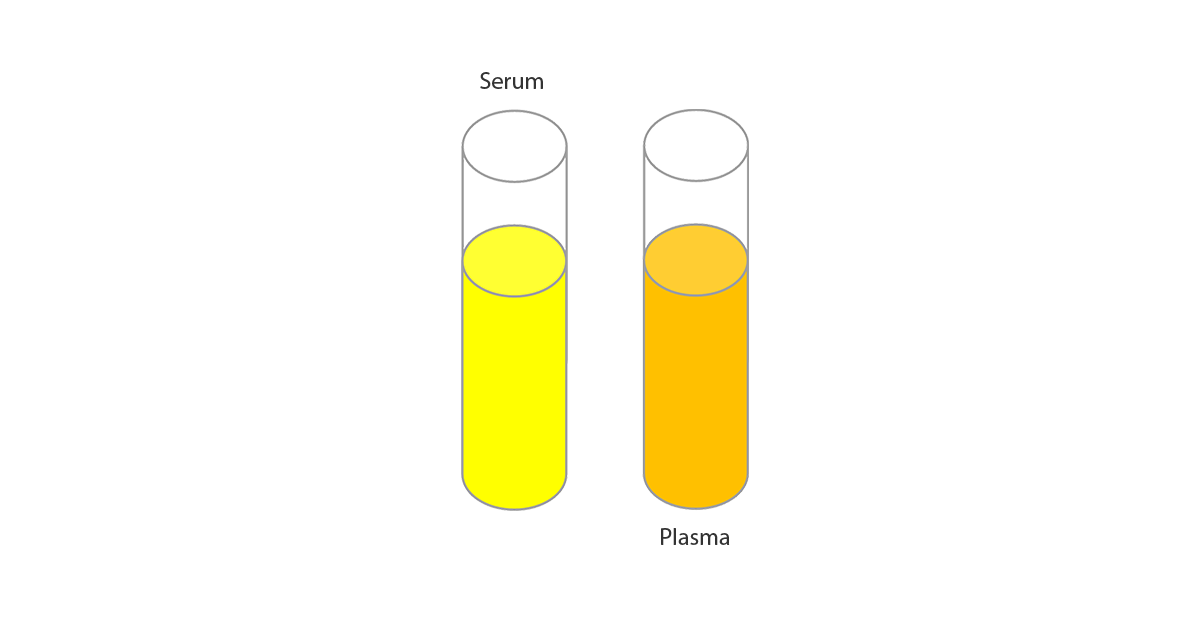 The Liquid Portion of Blood